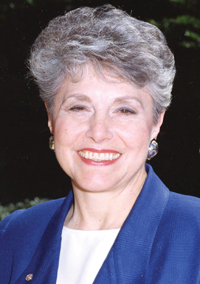 Dr. Geraldine Morrow died March 20th at the age of 86 and as a resident of Wasilla, Alaska.1   While Dr. Morrow accumulated many accolades during her long career as a dentist, including service to the American Dental Association in 1991-1992 as its first female president, the American Association of Women Dentists has its own memories from her years as a member of the organization.  Despite the barriers that her residing in Alaska posed in getting to AAWD meetings in the lower 48 states, she and AAWD found ways to communicate.

In 1985, Dr. Morrow was the third recipient (preceded by the first recipient, the late Dr. Jane Selbe, and by Dr. Marie Nylen) of AAWD’s highest honor, the Lucy Hobbs Taylor award.

In 1990, in the campaign that would take her to presidency of the ADA, AAWD members who were savvy in the ways of downtown Boston answered her call to help at the ADA convention being held in the city that year.  Dr. Morrow acknowledged the campaign support she received from AAWD by mentioning the organization by name during an interview published on youtube.com in 2015. 2   In that interview she noted that AAWD itself had no vote in the ADA election process.  However, she remembers AAWD’s support fondly and in talking about it, quoted June Warren Lee [the late Dr. Lee was an AAWD past president and a Lucy Hobbs Taylor recipient].  Dr. Lee had indicated to Dr. Morrow that a valuable outcome of Dr. Morrow’s candidacy and term was inspiration to those dentists who desired to participate in organized dentistry on their own terms. The corporate model of having a life’s goal of doing whatever is necessary to defeat opponents aspiring to the top of an organization became passé with Dr. Morrow’s example.  Dr. Morrow tended to view the promotion of the idea that there was a place in organized dentistry for dentists who wanted to put boundaries on their time and energies toward the cause of organized dentistry as worthy of her efforts.  Dr. Morrow’s campaign was fueled by her passion for keeping dentistry in the private sector and having the middleman being kept at bay.  In the late 1980s and early 1990s there was a view gaining prevalence that the government had the ability to run healthcare in the United States.  Dr. Morrow viewed the idea of a government takeover of dentistry as being incompatible with professionalism.  Prior to her campaign, Dr. Morrow had achieved notable accomplishments in Alaska keeping dentistry as a private sector endeavor.  Dr. Morrow credits the ability to join together with other members of organized dentistry in working toward common goals as key to those accomplishments.

In the early 2000’s, Dr. Morrow contributed to an Annual Meeting program that was held in Chicago by a taped presentation designed for the AAWD meeting audience.