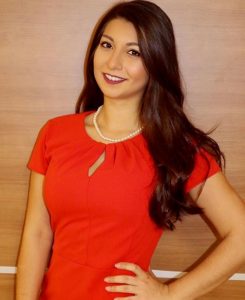 The American Association of Women Dentists (AAWD) recently selected University of New England’s Yalda Rostamnezhad as the organization’s 2019 Student of The Year.

Yalda Rostamnezhad is a fourth-year student at the University of New England College of Dental Medicine, in Portland, Maine, and will graduate in May 2020. Originally from Westwood, Massachusetts, Rostamnezhad attended Westwood High School. Afterward, she attended the Massachusetts College of Pharmacy and Health Sciences, where she received her bachelor’s degree in biology with a minor in public health.

According to her nominator, AAWD chapter faculty advisor Dr. Michelle W. Tsao, assistant clinical professor, Rostamnezhad was nominated for her “unwavering dedication to her AAWD student chapter.” The nomination states that Rostamnezhad has been a member of the UNE AWWD chapter since 2016, when she entered dental school, and has been a pivotal player in the successes and achievements of the chapter. Tsao continues, “From the beginning, she has supported the chapter to flourish into what it is now through her community service efforts, spearheading of chapter events and recruitment of new members.” Rostamnezhad also helped spearhead and organize all of AAWD’s events and played a pivotal role in increasing membership numbers this year by more than 40 members.

In keeping with AAWD’s mission is to advance, connect and enrich the lives of women dentists, Rostamnezhad dedicated much of her time and effort in 2019 to organizing numerous events, allowing for members to expand their horizons and explore new opportunities. She organized UNE’s first-ever powderpuff game, called the “Brush Rush,” which focused on member bonding through football; planned the chapter’s first-ever “Prosecco and Pearls Panel,” which featured a team of female faculty members in a discussion about being a woman in dentistry; organized a professional image building workshop for members; participated in the Polar Plunge into Sebago Lake to raise money for the Maine Children’s Cancer Program; volunteered at a local high school to speak to the sophomore class about pursuing a career in dentistry; organized a clothing drive for donations to the Florence House in Portland; organized a monthly lecture series to cover topics in dentistry that members would like to learn more about from faculty members at UNE; and volunteered at the Preble house soup kitchen on Saturdays, preparing meals for women at the shelter.

After dental school, Rostamnezhad plans to move back to Boston and work for a private practice office. “I have always wanted to open my own practice,” Rostamnezhad states, “and will aim to do so within a few years after graduating and learning the ins and outs of running a practice.”

She also states, “Receiving this award is a tremendous honor for me, as AAWD has been a substantial part of my dental school experience. When I first joined AAWD my D1 year, I was inspired by our former president and vice president, Colleen Ahearn and Maeve Daly, for bringing AAWD to our school and establishing our UNE chapter. Since then, I have worked incessantly on improving our AAWD chapter at UNE and expanding our members. I felt that it was my calling to empower the women in our chapter to work together and support each other on this journey to becoming the best providers we can be.”

Rostamnezhad continued, “By enriching their lives with mentorship from other AAWD members and female faculty members, we have united as a tight knit group of strong, independent women. I have learned so much from other chapters this experience has lead me to, such as our exemplary President Dr. Brittany Bergeron, along with all the members of AAWD who have reached out to collaborate with us. Being our chapter president has made me a better leader, a better listener and above all a better provider to my patients. I am so grateful for the steadfastness of the women before us who paved the way for our generation of women and aim to continue their work by eliminating the disparities that women in dentistry still face.”

Rostamnezhad says her message to other AAWD student members and chapters is to strive to leave everything they touch better than when they found it. “Work hard for what you have a passion for, and you will feel truly rewarded when your hard work comes to fruition,” she states.

AAWD President Dr. Brittany Bergeron states, “When I first met Yalda, I knew immediately she was different from other dental students I had encountered. She is a radiant star in our industry, and I’m delighted to be able to present her with this award!”